Kelvin Torve was raised in Rapid City and played for the Hardhats for 3 years, and in 1977 was on the first Post 22 team to qualify for the American Legion World Series. A graduate of Oral Roberts University, Torve played 3 years at ORU and was 2nd team All American (Sporting News) his Junior year. He was drafted in the 2nd round (36th overall) by the San Francisco Giants in 1981 and he went on to play 13 years of professional baseball, with 3 seasons in the Major Leagues with the New York Mets and Minnesota Twins. His final 2 years of professional baseball was in Japan, where he was a teammate of Ichiro Suzuki. He was named a Minor League All Star twice (AA in 1982 and AAA in 1990), and team MVP 5 times.

Torve and his wife Tonya moved back to Rapid City from North Carolina in 2016 to once again become part of the Post 22 family. He coached the Cadets to a 14U State Championship in 2016, and coached the Bullets to a 42-11 record and an appearance in the State Junior Legion tournament. 2018 was Torve’s first year at the helm of the Hardhats which resulted in a 57-12 record and the program’s 42nd State Championship. The team went 2-2 in the Midwest Regional tournament, finishing as one of the top 32 teams in the country.

Torve and his wife Tonya have 2 children, Tatum living in Lexington KY and Logan living in Belmont NC.

Ewing went on to participate in NCAA Division 1 baseball for 5 years. One year (Red-Shirt) at the University of Nebraska-Lincoln and four years at Campbell University in North Carolina. While at Campbell Ewing was awarded the James Ryskamp Award three of his four years given to the player who best exemplifies Christian character, dedication and baseball prowess. He served as a team Captain his Jr. and Sr. year. After college, Ewing was the head coach for the Sturgis American Legion and High School baseball team for 5 years (2004-2008). Under Ewing, the Sturgis program made their first State Tournament appearance.

Ewing has served as an assistant coach for the Post 22 Hardhats since 2012. Nic and Sherri have 4 kids; Cali, Natalie, Griffin, and Brogan.

Ryan has been coaching American Legion Baseball since 2006 and with Post 22 baseball since 2016. Ryan coached at Sturgis Post 33 from 2007-2012 serving as Varsity Assistant and the programs pitching coach. After Sturgis Ryan coached at Post 320 from 2013-2015. During that time, he served as Junior Legion Head coach (13’) and Varsity Assistant (14-15). For Post 22 Ryan served as the Bullets head coach his first year with the program (16’). The Bullets finished with a record of 41-10 under his leadership and went undefeated at State to win the 16U South Dakota State Championship. Ryan has been Head Pitching Coordinator since 2018.

Ryan graduated from Sturgis High School in 2005 and played baseball for Post 33 from (03-06.) As a pitcher, Ryan was selected to the South Dakota Coaches Association All State Team in 2005. Ryan was a four sport Athlete in High school lettering in Baseball, Basketball, Football and Tennis. After High School, Ryan went on to pitch for the University of Mary (NCAA Div II) in Bismarck, North Dakota.

After finishing his baseball career Ryan transferred to Black Hills State University where he received his degree in Secondary Education/History Teaching. Ryan also has his Master’s Degree in K-12 Educational Leadership and Administration.  After deciding to leave education in 2018 Ryan accepted a job, and is currently working, as a sales rep for universal Athletic. Ryan and his wife Shawna have been married since  2013 and have two children, Kaine and Claire.

Scott is from RC has a degree in Human Performance from Iowa State University, and is a Certified Sports Performance coach and Certified Strength Coach.

He is the all-time SD record holder in the high jump. He is the #3 All Time High Jumper at Iowa State, and attained both a US and World ranking.

Coach Caldwell is entering his first year as a Post 22 coach. Jace played in the Post 22 program for 6 years, the final two as a Hardhat for Coach Torve. As a Hardhat first baseman, Jace had a .987 fielding percentage earning one of the top spots in the Post 22 record books. He contributed to the 42nd state championship in 2018 and was a part of the state runner-up team in 2019. Jace received the Arete Morshing scholarship his senior year.

Jace graduated from Central High School in 2018. He is currently attending Black Hills State University. Jace is pursuing a major in Physical Education as well as minoring in Athletic Coaching and Health.

Our Sponsors and Partners 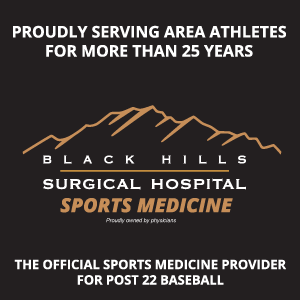 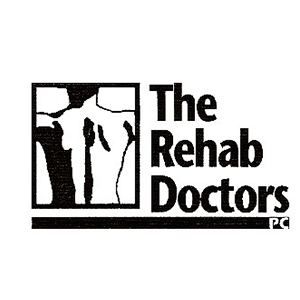 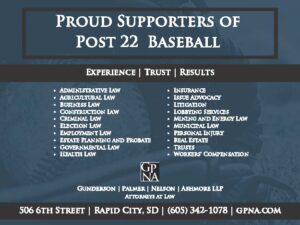 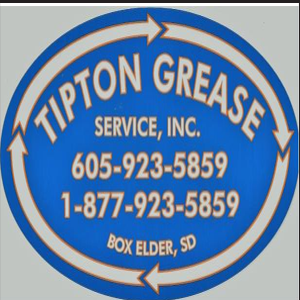 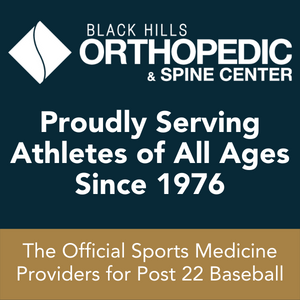